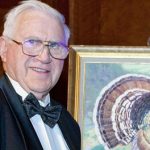 Derek Kelly joined the ATA in 1963, two years after it was formed, and is widely recognised as the champion of the traditional turkey.

His company Kelly Turkeys began producing turkeys in 1970. He re-introduced the bronze turkey to the UK and has established KellyBronze as a premium brand.  Another business, Farmgate Hatcheries, supplies the largest range of bronze, white and black poults to producers across the UK, Europe and beyond. Derek has served the turkey industry at all levels through the British Turkey Federation, British Poultry Council and Nation Farmers Union. 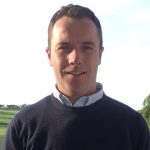 Duncan studied Agricultural Engineering at Harper Adams University College, where he gained a scholarship with the machinery manufacturer JCB. He is now a partner in F. Wreathall & Sons, based in Stock, Essex, farming turkeys and arable alongside his brother Tom and parents Patrick & Jane.

The turkey enterprise consists of supplying abattoirs with a steady supply of catering birds throughout the year, and also producing the highest quality traditional farm fresh turkeys for the Christmas market. Duncan is the third generation of Wreathalls to have been involved with the ATA committee.

Sue retired in 2019 as Transport Manager for Kelly Turkey Farms and Farmgate Hatcheries.

Chris is Technical Sales Specialist for Marriage’s feeds, supplying a variety of farms in East Anglia and the South East. He has a degree in Animal Science from the University of Kent.

James grew up on the family’s arable and beef farm near Chelmsford. He now a sixth generation Director of flour and feed milling company W & H Marriage & Sons.

Patrick has spent a career farming turkeys and arable crops. Along the way he has been involved in many farming initiatives, notably with the National Farmers Union.